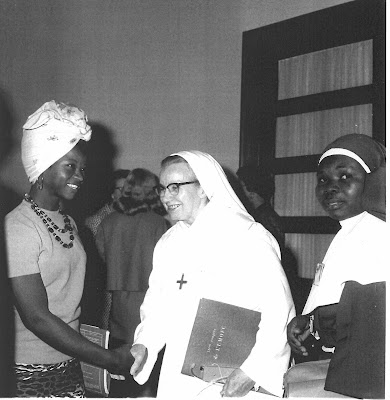 André du Sacré Coeur is at the origin of the famous "Mandel Decree" in 1939, the fruit of her intervention in one of the French parliament to defend West African women's rights to self-determination. "At the request of her superiors, she dedicated herself to study the status of women in West Africa, since 1930. Her research focused on customs, traditions that devalued and violated women's freedom. Enjoying trust through the relationships existing between the women and the sisters over the years, she managed to carry out a long investigation in West Africa. The results were gathered in an important book on gender and marital status in the French colonies. It showed that women were deprived of any right to manage themselves.  She wet to defend their cause before MPs in the House of Paris. Her plea was heard. A bill introduced in 1939 was voted unanimously, resulting into the Mandel Decree.  This decree brought some important changes to the traditional marriage arrangements and other aspects of women's life in West Africa. (Travail de mémoire page 394)

"Turning to the first of French Decrees, the Mandel Decree promulgated in 1939, its provisions dealt with aspects of marriage and related custom considered unacceptable as follows: Actual age of marriage of the parties to be married; Child betrothal; Consent of the parties to be married,; the problem of the widow... The Mandel Decree defined the minimum  age for contracting marriage in the West Africa French colony as 14 years for women and 16 years for men." (Source: Internet)