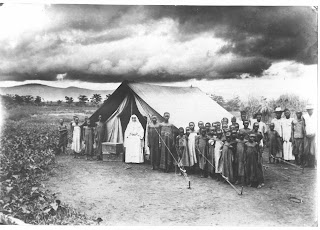 "The first caravan for Equatorial Africa left on June 7th 1894.  In central Africa as everywhere else, the Sisters, on their arrival, began working with the women and children. These had been looked after temporarily by the Fathers while waiting for the Sisters.  In the territories confided to the White Fathers, they were usually the first white women to penetrate into the interior of Africa and for a long time they were the only ones. |1|  They always established themselves at the mission post of the Fathers who had asked for them and had prepared a house for them. 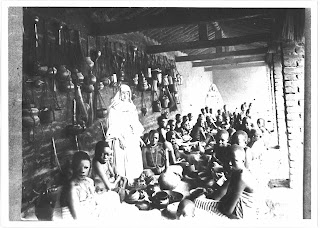 What is striking about this region is the origin of the slaves welcomed by the Sisters. At times they are prisoners of war who have been ransomed by the Fathers.  At other times they are children brought by army officers (some of them Protestants) or children taken from their parents by German officers as punishment.  Let’s listen to what the diaries say:
All the children were grouped together in the same center.  Thanks to the Sisters, the children of slaves, or the slaves themselves, and the children of the masters would from now on live in peace and trust, receiving the same education and developing the same values. Together they would learn that they are brothers and sisters because they are children of the same Father.  Was there any better way to fight against slavery?"