Mandela may be gone, but his DNA lives on (Carl Stauffer) 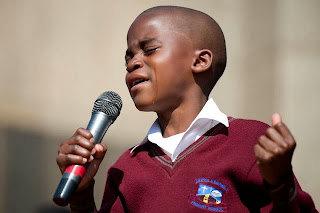 “Have you heard that Mandela died?” The staggering impact of this question took my breath away as I stepped into the office after a full day of classes on Thursday, December 5th. I texted my daughter who had grown up in South Africa, with these simple words, “Wow – this is huge!” Mourning the loss of Mandela has been an enormous undertaking. Sitting in a reflective circle with my Restorative Justice class, I tried to describe how Mandela resided in the very consciousness of so many South Africans. He resided in the collective psyche of the nation. He embodied what it meant to live with integrity and with few regrets. Indeed, his leadership presence seemed to be encoded with the moral fiber that now guides conceptions of good governance and just polity at a global level. This has been a particularly poignant grieving time for me having spent 16 years immersed in the historical, socio-political transition in South Africa (1994-2009). The world has lost a beacon of light.
But, Mandela transmitted his DNA to us. And herein lies the hope. While Mandela rarely articulated his faith in the public discourse, through his own admission, we know that he was critically formed by the Methodist missionary education he received as well as by icons of nonviolent justice and reconciliation like Gandhi, MLK (and others) and their transformative movements. In a deeply spiritual, almost covert way, Mandela represented a kind of incarnational presence that showed us what practical theology really looks like. Mandela was not only a political revolutionary – he was a spiritual subversive in his application of reconciliation. Refusing to be bound by tangible-intangible bifurcations, Mandela infused the spirituality of reconciliation into the realpolitik of his time and context in ways that few others would have ever dared to. Mandela was convinced that when you insert acts of reconciliation into the ‘zero-sum’ game of political realism you alter the state of the world. Indeed, Mandela seemed to have internalized the Jesus ethic of ‘enemy love’ in such a visceral, commonsensical manner that it eluded many of the prominent Church and diplomatic leaders around him. This, I believe is finally one of his greatest legacies.
First of all, Mandela understood that reconciliation was personal.
Secondly, Mandela understood that reconciliation was political.
Thirdly, Mandela understood that reconciliation and justice are inseparable.
Fourthly, Mandela understood that the arch of the universe bends in the direction of reconciliation.
Read the whole article at Political Theology Today >>