For thousands of years people in Western cultures have been wrestling with the illusions we've spun from our dualistic mindsets and beliefs. It's like we've been dreaming a shared nightmare together, grounded in the mechanistic ways our society has been organized, rooted in how we live and think.

Across the centuries, the very foundation of our so-called "Civilization" has been based on ideas of separation and superiority- men here, women there, Kings here, peasants there, humans here, Nature there. Walls of separation in our hearts and minds, a sense of sin and abandonment, believing that our entire species was "thrown out of Eden."

With linear thinking came an emphasis on time, our consciousnesses locked into mental projections of a feared or desired future, an imagined and idealized history.

When lost in these projections we become less aware of the magical nature of each moment, blind to the beauty, value and mystery of the HERE and NOW. This is how schools teach our children to think and feel, how our ancestors were dazed and hypnotized.

From this mindset grew Civilized man's mad circus of history, the hostile cultures of race and nationalism as identity, religion as truth, militarism as method, materialism and acquisition of wealth as the organizing goals of our institutions, the unquestioned values guiding our way of life.

It manifested with the rise of wealth obsessed empires seeking power and dominance. Dualistic thinking led to the Witch Hunts during the Renaissance, to Europeans coming to conquer the "New World" - thinking themselves superior to the Natives, stealing their land. Then going to Africa where they kidnaped and enslaved the people, dragging them across the oceans.

Over the centuries reductionistic thinking has given rise to all our most difficult problems- to racism, sexism, nationalism, slavery, human trafficking, organized crime, alcoholism, drug abuse, obesity, prostitution, genocide and all our wars. 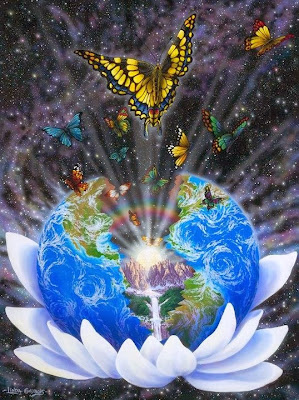 For thousands of years now, individual artists, poets, prophets and sages have been trying to help us wake up from our delusions. From Jesus to Buddha to Lao Tsu, from Shakespeare's "Romeo & Juliet" to Thoreau's "Civil Disobedience," Whitman & Blake's poems, Van Gogh's paintings and forward thru time to the "Wizard of Oz," " Pink Floyd's "Dark Side of the Moon" and James Cameron's "Avatar"...

There was a great creative burst of realization in the 1960s, but still the spirit crushing institutions, selfish lifestyles and unquestioned mechanistic assumptions of the past continue to exert a powerful hypnotic force.

With the rise of new technologies and industrialization our consumer lifestyles have overpowered the rivers, mountains and forests that surround us. Over the last hundred years we have been destroying Nature's ecosystems at an astounding rate.

Why has it been so difficult for humans to change?

In part, I think, it is because the "Civilized" Matrix will do whatever it can to avoid a shutdown. Our dominant institutions are designed to maintain control, to defend, expand and perpetuate their existence. Like the immune system of a body, attacking these systems directly only strengthens them, leads to hostility and violence.

Mostly however, I believe that we have not changed because too many of us are still hypnotized. Primarily identifying our sense of self with names, career, race, religion, gender, political perspective or nationality. Seeking pleasurable experiences, wealth, status and material possessions; mistakenly believing that these will bring us happiness and that the only way to solve complex problems is to "defeat the opposition."

What most of us have failed to see is that we are not these social and cultural roles we imagine ourselves to be.

We are Life, in human form. Ancestors of the stars and galaxies, children of the oceans and forests. We are creative expressions of Nature, as much a part of this planet as the rivers, trees, mountains and butterflies.

As more and more of us wake up to that deeper sense of identity we will be more easily able to transcend old thought patterns and beliefs. Observing Nature's Systems closely, studying her ways, we can re-write and delete old programming.

To truly bring an end to the nightmare- to really transform the world- a deeper wisdom has to first arise from within. We must "be the change" as Gandhi put it. We have to free ourselves first, transform our ways of thinking, feeling and behaving.

Then take the wisdom of our wholeness and apply it to everything we say and do, to all fields of human activity. Economics, entertainment, education, law, medicine, transportation, energy technologies- they all can (and must) be transformed.

We are not the solitary individuals we have believed ourselves to be. We are expressions of Universal life, Children of our Galaxy. We are the "leaves of grass" Walt Whitman spoke of - the Awakening voices of Eden, instruments of the great turning.