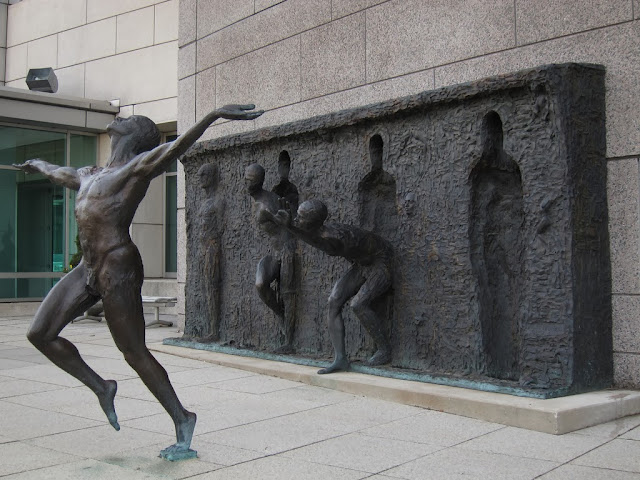 Zenos’ statement about his vision of the sculpture


I wanted to create a sculpture almost anyone, regardless of their background, could look at and instantly recognize that it is about the idea of struggling to break free. This sculpture is about the struggle for achievement of freedom through the creative process.

Although for me, this feeling sprang from a particular personal situation, I was conscious that it was a universal desire with almost everyone; that need to escape from some situation – be it an internal struggle or an adversarial circumstance, and to be free from it.

I began this work in a very traditional sculptural manner by creating a small model in clay called a macquette. The purpose of beginning in this manner is to capture the large action and major proportions of the figure within the overall design without any details to detract from the big idea. Another reason for not having details and for working on a small model only a few inches in height is that the small armature within it, holding the clay, is more easily manipulated, allowing for much greater flexibility in developing a concept. For example, an arm, a leg or a head can be pushed around without any concern for obliterating details, such as a nose or a finger. 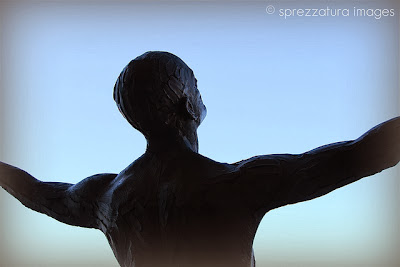 The macquette is the original mass of clay where a concept is born and from which it grows and develops. This was important later when I enlarged the sculpture from several inches long to 20 feet long, and I retained in the larger work a sense that all the conceptual material, its forms, focus and development sprang from this rough idea. The work metamorphosized, in the way that we do.

Although there are four figures represented, the work is really one figure moving from left to right. The composition develops from left to right beginning with a kind of mummy/death like captive figure locked into its background. In the second frame, the figure, reminiscent of Michaelangelo’s Rebellious Slave, begins to stir and struggle to escape. The figure in the third frame has torn himself from the wall that held him captive and is stepping out, reaching for freedom. In the fourth frame, the figure is entirely free, victorious, arms outstretched, completely away from the wall and from the grave space he left behind. He evokes an escape from his own mortality.

In working on the large scale sculpture, I was satisfied that those who drove by getting a quick look at it would see the big picture: that it was about escape. I was also concerned that those who worked in the building and who passed the sculpture frequently would have something more to see. There was a lot of empty space between the figures on the wall, which I saw as an opportunity to develop further ideas.

It was important to me that the sculpture have more than one theme going on at once. One of the other major ideas incorporated in the work is that the very process of creating the sculpture is clearly revealed in the work itself. The maquette is cast into the sculpture in the lower left hand corner. In the lower right corner is the cast of the sculptor’s hand holding the sculpture tool with two rolls of clay also cast in bronze. Throughout the background of the Wall, I have rolled out the clay and pressed it with my fingers so that my fingerprints are all over the sculpture. I have not hidden how I have made the piece. In fact, the whole idea of the macquette is enlarged so that all the figures in the background look like a giant macquette. And at the same time, as the figures move from left to right, I have shown how figures are developed when you are sculpting from the rough to the more finished product. 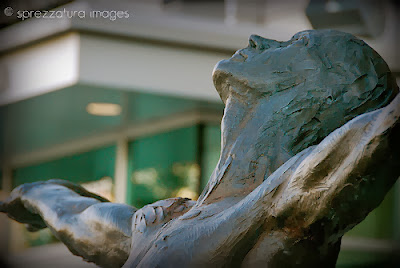 Elements of the sculpture trade beside the tools that are cast into the sculpture are calipers both for their use in measuring and their reference to Protagoras’ words “Man is the measure of all things.”

Also cast into the sculpture is an anatomical man, traditionally used as a reference by sculptors. Many of the heads and figures on the wall, some in the round and some in relief, are shown partially sculpted, revealing the process of creation.

Something else I have done with the sculpture is that I have created a one man show of my work. I have always admired Rodin’s Gates of Hell. I similarly thought I would incorporate many sculptures into the wall where it was suitable.

Like T.S. Eliot and other artists, I have put many personal elements in my work. My friend Philip, a sculptor who died of AIDS, created a work that I included in Freedom because he often expressed his wish to have it in a public space. He did not live long enough to accomplish this himself. My cat, who lived with me for 20 years, my mother, father, and my self portrait are in the work. It is obvious which face is mine because there is a ballooned phrase coming from my mouth with the word “freedom”, written backwards, making it clear that the face was sculpted in a mirror. I see the whole Wall sculpture as a kind of illusion akin to Alice’s Through the Looking Glass. 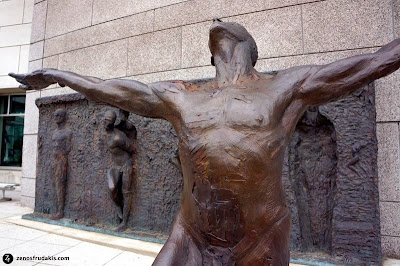 The sculpture contains an original Duane Hanson -- a bronze cast of my own hands that Duane cast for me as a gift.

Much of what I did with this sculpture has to do with taking traditional forms and combining them in non-traditional ways, forming a postmodern sensibility. For example, I dropped a wax cast of my father’s bust from two or three feet in height so that it broke into large pieces. I cast those into the wall in a fractured manner over another face, an old work I found in a vat of clay purchased from a sculptor who had long ago died.

It is important to me that the public interact with the sculpture, not just intellectually and emotionally but physically. I have created a space in which I have written “stand here” so that people can place themselves inside the sculpture and become part of the composition.

In the end, this sculpture is a statement about the artist’s attempt to free himself from the constraints of mortality through a long lasting creative form.