Daniel Rudd: Representative in the United States of Charles Lavigerie's Work for the African Slaves 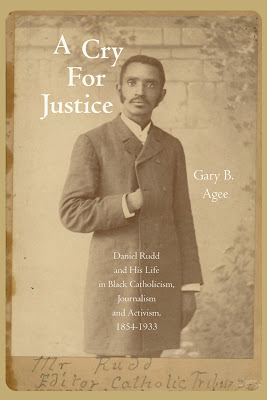 In the summer of 1889 Rudd was sent to Europe, where he met Cardinal Lavigerie. The cardinal had organized an antislavery conference that was to be held that summer in Lucerne. The exact circumstances regarding the origin and the funding of Rudd's trip are not completely clear. Some indication is given, however, by a news-paper column that originally appeared in a Philadelphia newspaper. In the July 6 issue of the American Catholic Tribune for that year, a column appeared entitled "Catholics in Boston" under the byline of a certain J. Gordon Street.


Street informed the readers that Cardinal Lavigerie was arranging a conference against slavery to be held in Lucerne and that he had appealed to "prominent colored men in the United States asking them to take an interest in the matter." Black Catholics in Boston had responded to the appeal, and Robert L. Ruffin, a prominent black Catholic and a collaborator with Rudd on the Tribune, had been chosen to represent Boston at the conference in Lucerne. Street's article went on to say that John Boyle O'Reilly, the editor of Boston's Catholic paper, the Pilot, had begun a campaign to raise funds for Ruffin's passage." In the same article, Street wrote, "There is another black man ... that the colored Catholics must sec that he goes to Lucerne - I mean Daniel A. Rudd of Cincinnati."