Bonded labour - or debt bondage - is probably the least known form of slavery today, and yet it is the most widely used method of enslaving people.  A person becomes a bonded labourer when their labour is demanded as a means of repayment for a loan.The person is then tricked or trapped into working for very little or no pay, often for seven days a week. The value of their work is invariably greater than the original sum of money borrowed. 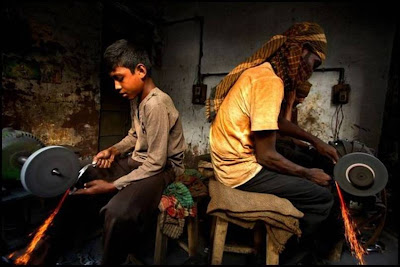 No, it has existed for hundreds of years. In South Asia it is rooted in the caste system and flourishes in agriculture, in cottage industries, and in factories.
Debt bondage was also used as a means of trapping indentured labourers into working on plantations in Africa, the Caribbean and South-East Asia, following the abolition of the slave trade.
Bonded labourers are forced to work to repay debts their employer says they owe, and they are not allowed to work for anyone else. Various forms of force are used to make sure they stay. In many cases they are kept under surveillance, sometimes under lock and key.
Poverty and threats of violence force many bonded labourers to stay with their masters, since they would not otherwise be able to eat or have a place to sleep.

Why does Bonded Labour exist?

Poverty, and people prepared to exploit the desperation of others lie at the heart of bonded labour.  Often without land or education, the need for cash just for daily survival forces people to sell their labour in exchange for a lump sum of money or a loan.

Despite the fact that bonded labour is illegal in most countries where it is found, governments are rarely willing to enforce the law, or to ensure that those who profit from it are punished.
Today the International Labour Organisation estimates a minimum 11.7 million are in forced labour in the Asia-Pacific region, the majority of whom are in debt bondage.

Who are the Bonded Laborers?

Entire families kept like cattle on farms in India, Pakistan and Nepal; migrant agricultural workers forced to remain on ranches in Brazil; and the organised export of women into domestic and sexual slavery in Europe.
Bonded labour is expanding due to poverty and the global demand for sources of cheap, expendable labour.