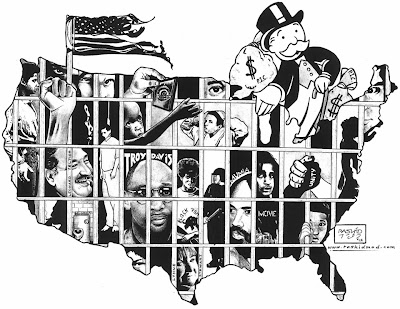 "I began teaching a class of 28 prisoners at a maximum-security prison in New Jersey during the first week of September. My last class meeting was Friday. The course revolved around plays by August Wilson, James Baldwin, John Herbert, Tarell Alvin McCraney, Miguel Piñero, Amiri Baraka and other playwrights who examine and give expression to the realities of America’s black underclass as well as the prison culture.

We also read Michelle Alexander’s important book “The New Jim Crow: Mass Incarceration in the Age of Colorblindness.” Each week the students were required to write dramatic scenes based on their experiences in and out of prison.

My class, although I did not know this when I began teaching, had the most literate and accomplished writers in the prison. And when I read the first batch of scenes it was immediately apparent that among these students was exceptional talent.

The class members had a keen eye for detail, had lived through the moral and physical struggles of prison life and had the ability to capture the patois of the urban poor and the prison underclass. They were able to portray in dramatic scenes and dialogue the horror of being locked in cages for years.

And although the play they collectively wrote is fundamentally about sacrifice—the sacrifice of mothers for children, brothers for brothers, prisoners for prisoners—the title they chose was “Caged.” They made it clear that the traps that hold them are as present in impoverished urban communities as in prison.

The mass incarceration of primarily poor people of color, people who seldom have access to adequate legal defense and who are often kept behind bars for years for nonviolent crimes or for crimes they did not commit, is one of the most shameful mass injustices committed in the United States.

The 28 men in my class have cumulatively spent 515 years in prison. Some of their sentences are utterly disproportionate to the crimes of which they are accused. Most are not even close to finishing their sentences or coming before a parole board, which rarely grants first-time applicants their liberty. Many of them are in for life.

One of my students was arrested at the age of 14 for a crime that strong evidence suggests he did not commit. He will not be eligible for parole until he is 70. He never had a chance in court and because he cannot afford a private attorney he has no chance now of challenging the grotesque sentence handed to him as a child.

My stacks of 28 scenes written by the students each week, the paper bearing the musty, sour smell of the prison, rose into an ungainly pile. I laboriously shaped and edited the material. It grew, line by line, scene by scene, into a powerful and deeply moving dramatic vehicle.

The voices and reality of those at the very bottom rung of our society—some of the 2.2 million people in prisons and jails across the country, those we as a society are permitted to demonize and hate, just as African-Americans were once demonized and hated during slavery and Jim Crow—began to flash across the pages like lightning strikes.

There was more brilliance, literacy, passion, wisdom and integrity in that classroom than in any other classroom I have taught in, and I have taught at some of the most elite universities in the country. The mass incarceration of men and women like my students impoverishes not just them, their families and their communities, but the rest of us as well…

Excerpt from "The Play's the Thing" by Chris Hedges