We have entered a watershed moment not only here in America, but also globally. It’s a moment that could help us wake up to a deeper level of collective awareness and renewal—or a moment when we could spiral down into chaos, violence, and fascism-like conditions. Whether it’s one or the other depends on our capacity to become aware of our collective blind spot.
Donald Trump’s election as the 45th president of the United States sent shock waves across the planet. In a replay of Brexit, a coalition of white, working- (and middle-) class men (and women) from mostly rural areas swept an anti-establishment candidate into office. But the election of Trump is hardly an outlier: just look at the global rise of strongmen such as Vladimir Putin, Recep Erdogan, Viktor Orban, and Rodrigo Duterte and the surge of other right-wing populists.
Why has the richest and most prosperous country in the world now elected a climate denier who used racist, sexist, misogynistic, and xenophobic language throughout his campaign? What makes us put someone like him in the White House? Why did we create a presidential election between two of the most disliked candidates of all time, Donald Trump and Hillary Clinton? Why did Trump, who lied and attacked minorities, journalists, women, and the disabled, only become stronger and stronger throughout his campaign? What is the blind spot that has kept us from seeing and shifting the deeper forces at play? Why, again and again, do we collectively create results that most people don’t want? 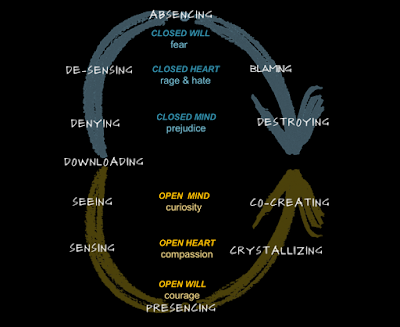