Diarmaid MacCulloch is the decorated Professor of the History of the Church in the University of Oxford.  He is the author of several books, including Christianity, The First Three Thousand Years, which was adapted to a great mini-series for BBC 4 television. 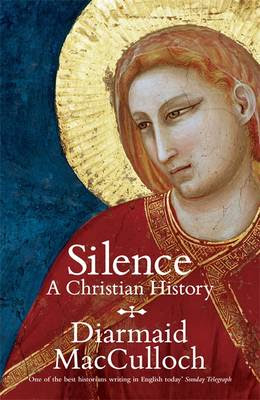 In his latest book Silence – A Christian History (Viking, September 2013,)  MacCulloch shows how Jesus chose to emphasize silence as an essential part of his message and how silence shaped the great medieval monastic communities of Europe. He dives into Carmelite Mysticism, Dionysius the Areopagite, Christian Meditation and more. He also examines the darker forms of religious silence, from the church’s embrace of slavery and its muted reaction to the Holocaust to the cover-up by Catholic authorities of devastating sexual scandals.
The book is a must-read and reviews are starting to come in, both positive and negative. Of particular note to Contemplative Christians is this review by Karen Armstrong.  The Guardian also has a very thorough review of note here.
Professor Diarmaid gave a series of lectures just over a year ago on the contents of the book for the University of Edinburgh, which they recorded and uploaded. The contents and links to them are below, the description for each video in quotes in written by the University.
‪Prof. Diarmaid MacCulloch – Voices and Silence in Tanakh and Christian New Testament (lecture 1)
The lecture discussed a change in emphasis between the Hebrew Scripture (the Tanakh) and what Christians made of what is arguably a minority positive strand in Judaic thinking on silence; we survey the growth of a consciousness of silence, particularly in the cosmos, in Jewish religion. We seek the voice of Jesus to be heard behind the text of the New Testament, with his distinctive use of silence and silences; the place of silence in the first Christian attempts to understand the significance of Jesus Christ, and its relationship to the formation of the Church.
‪Prof. Diarmaid MacCulloch – Catholic Christianity and the Arrival of Ascetism,100-400 (lecture 2)
Counter-strands to silence in the early Church, encouraged by its congregational worship and cult of martyrdom, and the effect of gnostic Christianities in shaping what the emerging Catholic Church decided to emphasise or ignore.
The emergence of new positive theologies of silence: negative theology and its sources in the Platonic tradition; the development of asceticism in the mainstream Church in Syria from the second century, and its possible sources: the place of silence in the development of monasticism and eremetical life in Christianity.
The importance of the remaking of monasticism in Egypt; the vital role of a forgotten theologian, Evagrius Ponticus.

‪Prof. Diarmaid MacCulloch – Silence Through Schism and Two Reformations: 451-1500 (lecture 3)
The significance of the threeway split in Christianity after the Council of Chalcedon (451). The purposeful Chalcedonian forgetting of Evagrius Ponticus and the contribution of an anonymous theologian who took the name Dionysius the Areopagite. The role of Augustine in the Western Church: a theologian of words, not silence. The transformation in the use of silence and its function after the Carolingian expansion of Benedictine monastic life (together with the West’s discovery of pseudo-Dionysius), and the further development through the great years of Cluny Abbey. Counter-currents on silence in the medieval West, and the significance of the Iconoclastic controversy, and later hesychasm, in the Byzantine world. Tensions between clerical and lay spirituality in the late medieval West.

‪Prof. Diarmaid MacCulloch – Silence Transformed: The Third Reformation 1500-1700 (lecture 4)
The noisiness of Protestantism, particularly exacerbated by the end of monasticism, unsuccessfully countered in the Church of Zürich but transcended first among radical Reformers (especially Caspar Schwenckfeld and Sebastian Franck) and a century later by the Society of Friends. The difficulties of contemplatives in the Counter-Reformation, where activism was the characteristic of the new foundations of Jesuits and Ursulines, and the problems faced by such revivals as the Discalced Carmelites. The troubles of Madame Guyon and Quietists.

‪Prof. Diarmaid MacCulloch – Getting Behind Noise in Christian History (lecture 5)
So far, the story has largely been about overt history: the positive utterances and actions of public Christianity. We turn now to further and more complex varieties of silence: first the phenomenon of ‘Nicodemism’, simultaneously audible to those with ears to hear, and not to be heard by others.
New politic silences were caused by the fissuring of Western Christianity, through efforts to sidestep the consequent violence and persecution; a rediscovery of classical discussion of silence took place on the eve of the Reformation in the writings of Italian civic humanists, and this tradition fused with the debate about Nicodemism and the place of quiet versus overt toleration.
Over the centuries, particular groups who represented the ‘Other’, some Christian, some not, have made themselves invisible simply in order to survive: crypto-Judaism and its effect on Christianity are discussed, together with examples of Christian Nicodemism, notably the Reformation ‘Family of Love’ and the growth of a distinctive gay sub-culture within nineteenth- and twentieth-century Anglo-Catholicism.
We move to those things best left unsaid in order to build identity in Christian organisations and newly-evangelised regions, and the way in which themes and dogmatic position once considered vital and central for the Christian life have been quietly abandoned without much acknowledgement of their one-time importance. We scrutinise Christian problems in dealing honestly with sexuality, with a specific example.
Finally we turn to the confused reaction of Churches to shame over past sin, the example being complicity in the slave trade.

‪Prof. Diarmaid MacCulloch – Silence in Modern and Future Christianities (lecture 6)
We consider the democratisation of the quest for silence in industrial society: the tangling of a secular society with the silences provided by Christian tradition, through for instance the popularity of retreats, or the observance of silence in remembrance. We see the importance of ‘whistle-blowing’ to modern Christianity, and its use of the historical discipline. We ponder the relation of agnosticism to silence; the role of music in silence and Christian understanding; the relationship between Word and Spirit in the future of Christian life.
Source: The Seeker's Lamp