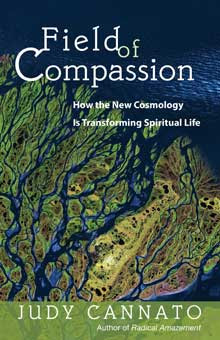 Field of Compassion was written by Judy Cannato, who was also the author of Radical Amazement. The Adult Forum met to discuss Cannato’s book last winter (2012). In this, her last book before she died, Cannato calls us to action. She asks us to focus our energies to help shape our world with compassion. She reminds us that salvation is not about escaping death but knowing that death is just another fact of life, an endless cycle propelled by infinite love.

Cannato weaves the story of the universe into a tapestry, affirming in her story that we are all connected in the web of life. She discusses how stories are powerful containers for the energies of life. Those stories have the power to draw us in because they invite us to act. Cannato thinks that we exist uncomfortably between two stories, the story of religion and the story of science. She suggests that we need to write a new story, a story that affirms our current, transcendent experience. This is a story that can inspire us to embrace a compassionate awakened consciousness, enabling us to make decisions that benefit all of humanity.

Cannato proposes that one way to facilitate understanding of our new “Universe Story” is to develop a unified view of the world using the concept of “morphogenic fields” and holons. She takes the time to carefully describe these two concepts. She borrows the concept of “morphogenic fields” from Rupert Sheldrake, a British biologist of the 20th century, who believed that living creatures can hold information which relates to memories and habits. Morphogenic fields can be thought of as fields of information that are related to the universe.

Cannato further describes Arthur Koestler’s concept of a holon, a “whole-part” that has four characteristics: self-preservation, self-adaption, self-transcendence and self-dissolution. She states that in the universe every “morphogenic field” is a “holon” and vice versa. For Cannato the image of the morphogenic field/holon can be coupled with a process she describes as “morphic resonance” to understand the new Universal Story that we are creating. She believes that we are already living and moving through the new Universal Story of increased compassion and that if we recognize that and live our lives in that manner, then the universe and humanity will be better for it.

● requires effort on the part of the receiver

● includes family, but not automatically

● is risky and costly

● involves a can-do attitude, but releases us from whatever bondage that straps us to our old ways. Cannato believes that the Kingdom of God has the power to release us, with hope and courage, to become change agents.

In the remaining chapters Cannato discusses the emerging capacities that she believes will help each of us grow the “Field of Compassion.” They include the concepts of meditation, intention, compassion, and grace which can create in us an active transcendence.

Although this call to individual and universal transformation covers difficult subjects, Cannato helps along every step of the way by giving us prayers and contemplative questions at the end of each chapter. These allow us to personally mediate on our response to the subjects presented. She also liberally spices us her book with incredibly rich examples and quotes from the Bible and other sources, including Thomas Merton, Diarmuid O’Murchu, Albert Schweitzer, Pierre Teilhard de Chardin, and the Dali Lama. I will end my review with one such quote from Chief Seattle: