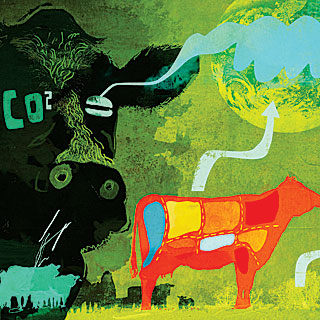 Global warming has been called humankind's "greatest challenge" and the world's most grave environmental threat. Many conscientious people are trying to help reduce global warming by driving more fuel-efficient cars and using energy-saving light bulbs. Although this helps, science shows that going vegan is one of the most effective ways to fight global warming.
A recent United Nations report concluded that a global shift toward a vegan diet is extremely important in order to combat the worst effects of climate change. According to the United Nations, raising animals for food is "one of the top two or three most significant contributors to the most serious environmental problems, at every scale from local to global."  In addition, the official handbook for Live Earth, the anti–climate change concerts that Al Gore helped organize, says that not eating meat is the "single most effective thing you can do" to reduce your climate change impact.
Carbon dioxide, methane, and nitrous oxide together cause the vast majority of global warming. Raising animals for food is one of the largest sources of carbon dioxide and the single largest source of both methane and nitrous oxide emissions.

Link to the article >>