Brazil - Repression against indigenous peoples has become a systematic practice 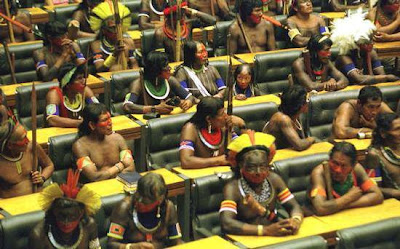 The Indigenous Missionary Council , issued a statement on May 20 in which it denounced the "illegal and authoritarian" manner with which the missionaries and staff of CIMI were treated by the Federal Police in the state of Mato Grosso do Sul, in the municipality of Sidrolândia, during the clearing operations of the Buriti farm, occupied by indigenous people since 15 May.The statement recalls similar events in which the police expelled journalists or members of CIMI, as in the case of the hydroelectric plant of Belo Monte."In Brazil, more and more often, the police assumes the role of political interlocutor in land conflicts and violations of the rights of indigenous peoples. What is happening is the militarization of conflicts linked to the struggle for indigenous rights. Institutionalization of this practice is a brutal attack against a journalist, against the freedom of social organizations and, even more, against the established democratic relations and law in our society.We denounce this act of unjustified, arbitrary and illegal censorship," said the statement sent to Fides.

In the photo: indigenous people from the Kayapo tribe in Brazil attend a round table event for the Brazilian church brotherhood campaign (AP Photo/Antonio Araujo)