The Power of the Powerless in Dark Times 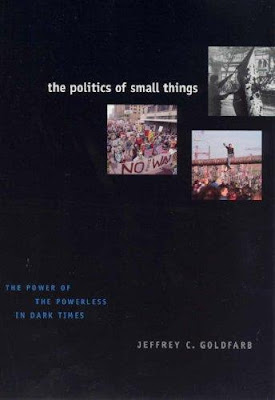 Political change doesn’t always begin with a bang; it often starts with just a whisper. From the discussions around kitchen tables that led to the dismantling of the Soviet bloc to the more recent emergence of Internet initiatives like MoveOn.org and Redeem the Vote that are revolutionizing the American political landscape, consequential political life develops in small spaces where dialogue generates political power.


In The Politics of Small Things, Jeffrey Goldfarb provides an innovative way for understanding politics, a way of appreciating the significance of politics at the micro level by comparatively analyzing key turning points and institutions in recent history. He presents a sociology of human interactions that lead from small to large: dissent around the old Soviet bloc;  life on the streets in Warsaw, Prague, and Bucharest in 1989; the network of terror that spawned 9/11; and the religious and Internet mobilizations that transformed the 2004 presidential election, to name a few. In such pivotal moments, he masterfully shows, political autonomy can be generated, presenting alternatives to the big politics of the global stage and the dominant narratives of terrorism, antiterrorism, and globalization.