Reclaiming Our Imaginations from 'There Is No Alternative' 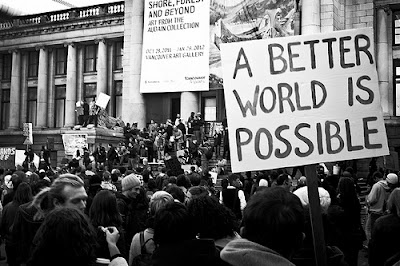 by Andrea Brower
We live in a time of heavy fog. A time when, though many of us dissent and resist, humanity seems committed to a course of collective suicide in the name of preserving an economic system that generates scarcity no matter how much is actually produced. To demand that all have enough to eat on a planet that grows enough food, that absurd numbers of people do not die from preventable disease, that utter human deprivation amongst plenty is not tolerated, or that we put the natural laws of the biosphere above socially constructed economic “laws” — is presented as unrealistic, as the fantasy of idealists or those who are naive to the “complexity” of the world’s problems. If we create and recreate the world everyday, then how has it become so supposedly absurd to believe we might actually create a world that is honestly making the possibilities of egalitarianism, justice and democracy?
Capitalism — the logic of subordinating every aspect of life to the accumulation of profit (i.e. the “rules of the market”) — has become today’s “common sense.” It has become almost unthinkable to imagine coherent alternatives to this logic, even when considering the most basic of human needs — food, water, healthcare, education. Though many have an understanding of capitalism’s failings, there is a resignation towards its inevitability. Margaret Thatcher’s famous words, “There Is No Alternative,” no longer need to be spoken, they are simply accepted as normal, non-ideological, neutral.
What sustains the tragic myth that There Is No Alternative? Those committed to building a more just future must begin re-thinking and revealing the taken-for-granted assumptions that make capitalism “common sense,” and bring these into the realm of mainstream public debate in order to widen horizons of possibility. We can’t leave this task to the pages of peer-reviewed journals and classrooms of social theory — these conversations must enter also into the family dining rooms and TV screens. Here are some thoughts on conversation starters:
Read the whole article >>